The home owner requested conservatory quotes from various Conservatory Companies in Peterborough. Fortunately due to our outstanding reputation Peterborough Windows & Doors, not forgetting our low prices, we won the quote. The property was based in Orton Waterville, Peterborough. The occupier required a conservatory to be built connecting two existing rooms, they only required a two wall conservatory, they also required box-guttering. The glass conservatory roof that they chose was the Celsius Self-Cleaning roof.

The foundation level for this conservatory depended on many different factors. The soil condition on this site was extremely good as it was far from trees, rivers, streams or clay areas. Drainage and pipe work was also assessed during pre-survey.  It is extremely important to avoid drainage covers and pipework as permission may be required to alter these. They would also have an impact on either the foundations or the conservatory base. Depending on the type of ground, we normally dip to 1m in depth, however if the ground has lots of clay, we will dig down to 1.5m. We will also opt for 1.5m for an orangery foundation too.

The brick cavity and damp-proof course is also built from the base which is insulated with 75mm wall insulation.

The conservatory base was constructed from a layer of ‘hard-core’ covered with a layer of sand. The hard-core is extremely tough which is crushed and laid on top of the concrete foundation providing a levelled base. We aim for at least 150mm of hard-core which is calculated within the foundation structure.

The base needs to be protected from the elements therefore a special damp-proofing material was used to cover the conservatory base. This ensured that moisture from the ground would not be able to rise through the foundations into the conservatory floor.

The insulation of the conservatory floor is extremely important. This insulation reduces heat loss via the floor. We always recommend at least 70mm to 100mm of high quality floor insulation.

Once the floor is completely insulated then the floor requires a final layer which will make it smooth and level, ready for either carpet or hard flooring. The screed is made from a fixture of cement and sand, then smoothed with a level providing that beautiful smooth finish. Perfectly flat for any type of flooring to be laid. 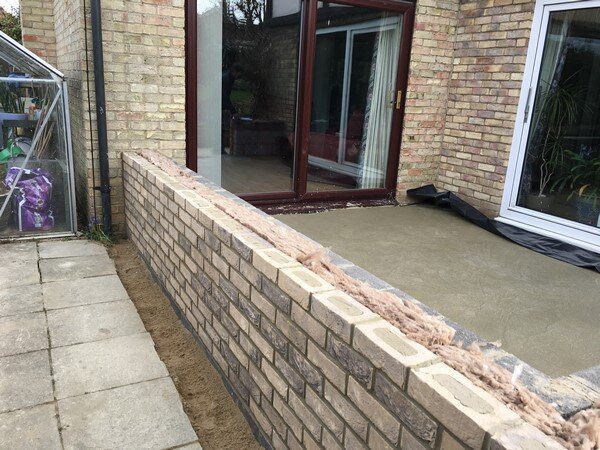 As we used the same bricks as the original house bricks, this allowed the conservatory to flow nicely making the conservatory look for part of the building rather than an additional building. The brick and motor colours were also specially choosing to match the existing walls.

The conservatory framework which the customer choose was mahogany in colour which would best match the existing window frames of the house.  The frame type was bevelled edges with a 28mm double glazed unit.

The customer also required top opening as these would allow maximum air into the conservatory. Whilst opting for stunning French Doors as their entrance door.

This attractive Pilkington Active Blue conservatory roof as illustrated in the photograph, has a coated tint that helps to reflect unwanted sun from entering the conservatory. The glass is unique as it is self-cleaning, so there is no need to be climbing on top of the conservatory trying to clean the glass roof.  The attractive blue tint offers a solar control on the glass, which helps to keep internal; temperatures cool whilst maintaining excellent light transmittance. The self-cleaning coating of photo-catalytic and hydrophilic properties, allows the roof to clean itself, so there is no need to try to get into those difficult places.

Reduces the need to manually clean the roof. Saves on water, no harmful detergents, reduces risk of potential harm from falling.

Solar heat is also condensed from entering the conservatory, ensuring that the room more comfortable, decreasing the need to try to cool the room down during the summer months. This solar reflection also works during cloudy days or even night times. This outstanding Pilkington Active Blue conservatory roof is available in A-rating too.

How does the self-cleaning glass work?

The external glass pane is coated with a specially formulated dual-action self-cleaning coating. It has got photo-catalytic and hydrophilic properties, and works in two stages:

During long dry spells the glass can be cleaned by simply hosing it down with clean water.

The installation of electrics is an extremely important part of this installation and must be completed by a certified electrician. The homeowner required 2 wall lights and 4 double sockets, which would be situated at equal spaces around the conservatory dwarf wall interior. For additional safety a fuse was also installed within this loop which would automatically cut off the electrics within the conservatory if the load was too great.

As the conservatory was built within two existing walls, then the roof would slop backwards towards these hosting walls. It was therefore vital to install box guttering.

It was vital that this box guttering was specified during the initial sales and survey stage. Adequate support need to be considered to allow sufficient attachment of this box guttering. The box guttering would not be able to be installed onto fascia’s or brick piers, gallows brackets or any other hangers.

During installation the box gutters required support for more than 2.25m. Our box gutter is coated in insulation to minimise risk of condensation. The box guttering was sleeved and bolted where the gutters were joined.

To ensure seamless and watertight, then injection moulded adapters were used. These were installed between the uPVC gutter and the aluminium box gutter. Each adapter is installed with its own dry joint gasket, then sealant is used to ensure that is weather protected.

There are many reasons why conservatories are becoming more popular throughout Peterborough. Firstly it can restore space that is needed within the home, without the requirement of a full extension. There are many different forms of conservatory including the Victorian, Edwardian and P-shaped, also Lean-To conservatories. All conservatories will compensate for either lack of space or joining two rooms together like on this project.

Conservatories can be used for multi-purpose reasons, either a children’s play room or even an airy place to rest after a long day at work.

The conservatory connects the home with the garden, French Doors or Bi-folding doors will open the house up so that you feel that the garden is your living space.

You can significantly narrow the gap between your home and garden by installing a conservatory between the two destinations to better connect them. Integrating patio, French or bi-folding doors into the design and opening them will also help to make the house and garden feel like one giant living space.